In the Middle of the Mediterranean

The exhibition Nel Mezzo del Mezzo (In the middle of the middle: Contemporary Art of the Mediterranean) was shown at five venues in Palermo in 2015, from October 10th until November 30th. Its main venue was Palazzo RISO, the Museum for Contemporary Art of Sicily. The three curators Christine Macel, Marco Bazzini, and Bartomeu Mari brought together works that deal with the nature of the Mediterranean Sea, in the ways it both unites and divides. The wide range of different artistic strategies on display amounted to a thorough overview. A strength was the carefully curated collocation of lesser known works by renowned artists and of artistic positions that don’t have a voice in the international art world. Some artists thematized the Mediterranean’s possibility to move people and goods. Other artworks engaged with its possibilities of cultural and religious exchange, such as Latifa Echakhch’s installation of smashed moroccan tea glasses (Erratum, 2015), or dealt with the natural beauty and power of the sea, like Sophie Calle’s calmly filmed portraits of adults who see the sea for the first time in their lives (Voir la Mer, 2011). In the exhibition, each artwork had enough space to breathe on its own, while simultaneously gaining meaning via the constellation of works among which it was displayed – a curatorial strategy that called attention to its similarities and differences to works produced in other periods and geographical areas. Surveying the works within these given contexts, it became evident that each artist’s perspective and their chosen aesthetic language arise from their particular relation with the Mediterranean. For there is no such thing as a “moroccan style”, rather diverse individual stiles and aesthetic strategies.

The three curators come from major European institutions in France (Centre Pompidou), Spain (MACBA) and Italy (Centro Pecci). This fact is mirrored in the choice of the artists, of whom the majority were either raised, educated, or based in a northwestern European country, or a combination of these.1 Even though the diversity of experiences in the Mediterranean region appears to have served as selection criteria, the curatorial framing device remains a northwestern European one. The curatorial board neither critically investigates in its own context – its involvement in the western art world – nor challenges the white-cube as a production facility of value. 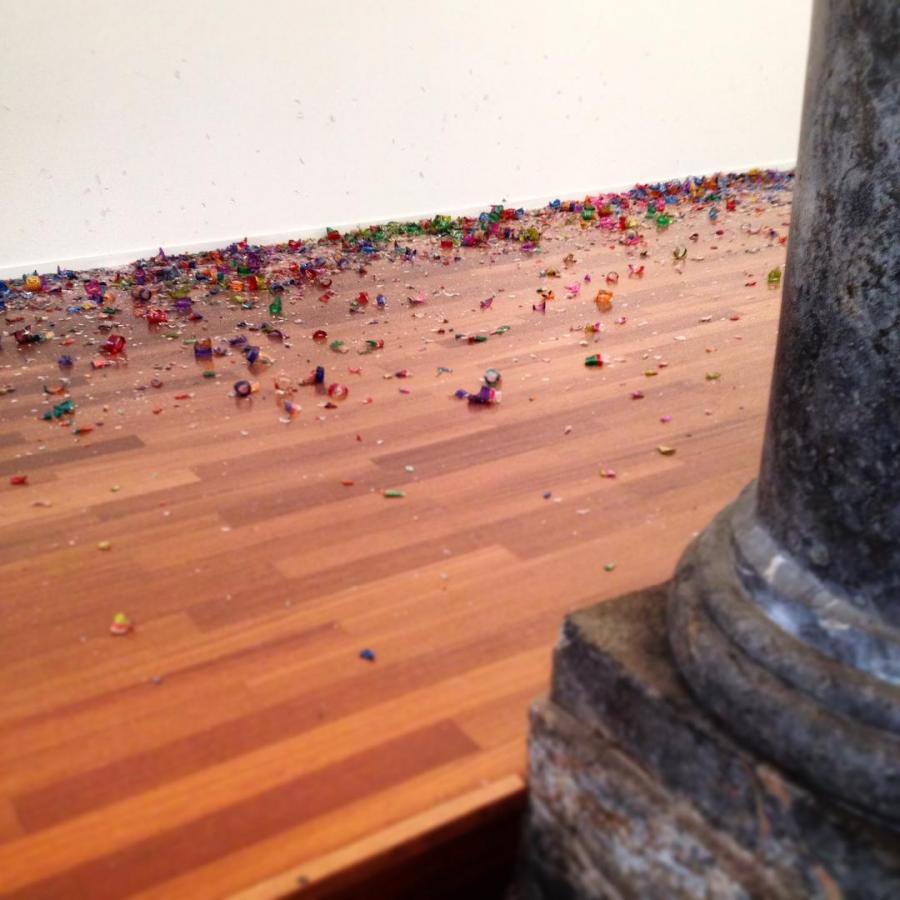 As written in the leaflet and the catalogue2 for the exhibition, Nel Mezzo del Mezzo is dedicated to the memory, the sacrifice and the courage of Khaled Al-Asaad. He was the leading archeologist of Palmyra and refused to stand down when ISIS took control of the area. In August 2015, he was “barbarically murdered” by the fundamentalist regime.

In such dedications, respect and gratitude is expressed. Furthermore, they subtly imply the dedicator has learned from the addressee of the dedication, who serves as an example for the making of their own work. With that in mind, how am I to interpret this dedication? What have the curators learned from Khaled Al-Asaad and how has it influenced their work?

Looking for the connection between Palermo’s contemporary white-cube art scene and the archaeologists’ work at Palmyra, a similarity between the cities symbolic power surfaced, particularly in regard to cultural diversity. Positioned in the middle of the Mediterranean Sea, contemporary Sicilian culture is constituted by the heritages of its many colonizers – the Greeks, the Romans, the Arabs, the Normans, the Spaniards, and some more who incorporated the island into their empires. The current culture and society exist in the limbo of not belonging to Europe any more, and not yet belonging to North Africa. Whereas Palmyra was in the third century after Christ a wealthy metropolis and vivid economic, religious, and cultural centre on the main trade-route between China, India, Persia and the Roman Empire. As such, Palmyra stands still today for cultural and spiritual diversity. Since 1980, the ruined city has been listed by UNESCO as a world heritage site.3 And in many ways because of this symbolism, ISIS subsumed the site into its “caliphate” in the fall of 2015, exploding the ruins and killing the researchers working there.4

Even after performing these interpretive arabesques, the dedication still puzzled me. Do the curators see a parallel between their work in Palermo and the custodians’ work at Palmyra? Has Khaled Al-Assad’s martyrdom served as an example for the curators and their work? If so, how? These questions remain untouched in the exhibition and the catalogue. In art, one looks for manifestations of the struggle involved in translating this chaotic, inexplicable helter-skelter world into an individual aesthetic language. The dedication to the murdered custodian obstructs this view. It teases at something unignorably cruel, but does so in far too an ephemeral way as to prompt the exigent question: how can we as cultural producers deal with the destruction of human lives and cultural heritage by fundamentalists? The dedication plays like a facebook-post: it marginally sheds light on something brutal that happened to someone far away.

Addressing a world so distant from my own, the dedication remains an empty gesture alien to the broader reality of the exhibition or Palermo. This might have to do with the same curatorial obliviousness to their own context, that lead to the uncritical use of the white-cube environment. One would hope this self-reflective level, upon which the curators would consider their own involvement in the construction of value within the northwestern European art world, would somehow shape the form of the exhibition. And yet it is completely missing. 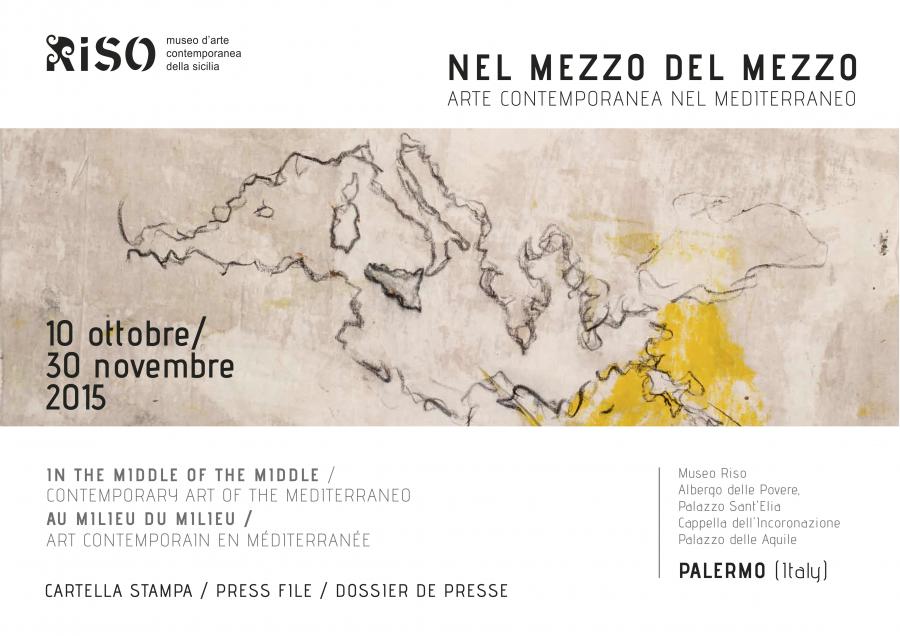 Sure, Palermo has not been the hot centre of the discourses on the white cube and Eurocentrism. Therefore, to install a proper white cube exhibition at Palermo can be seen as necessary, if not progressive. And even though this line of argumentation takes it as a grand achievement to simply bring these internationally renowned curators and artists to the city, there is a dangerous blind spot in such an evaluation. In 2015, with postcolonial critique being common ground, an exhibition like Nel Mezzo del Mezzo cannot help but appear suspicious. Without doubt it was an excellently curated collection of strong thematic and aesthetic positions – but why export a notion of art long outdated in the major northwestern European institutes to the geographical periphery of Europe? Would the curators show the exhibit at their institutes, for example Mari at the MACBA, which is also located at the Mediterranean? Would the curators risk the dedication to Khaled Al-Asaad on the wall above the introduction text at their home institutions?

Thanks to Jason King, Mira Hirtz and Nicolò Bartolone for accompanying the process of translating fleeing thoughts into written language.

Johanna Ziebritzki is an art theorist focused on cultural studies. At the moment (2016) she investigates exhibitions as a cultural tool. She is based in Karlsruhe, Germany, where she studies at the HfG.

‹I sent you something by email last night…›