It is by no means a surprise that people speak about an astonishing experience after they visited the Roden Crater of James Turrell. A massive naked-eye observatory that was designed specifically for viewing and experiencing sky-light, solar, and celestial phenomena. An artwork like Roden Crater uses its specific environment to establish a sublime experience. For the American Philosopher John Dewey art is about the biological sensory exchange between man and his environment. Experience represents the core of his aesthetic concept: ‹[…] An experience is a product, one might almost say bi-product, of continuous and cumulative interaction of an organic self with the world.›1 In the romantic painting of David Casper Friedrich the sublime is captured as a motif. The painting The Monk at the Sea displays an impression of experiencing the sublime in that time. In the abstract expressionism of Barnett Newman2 however the material, the painting as a thing acts as the medium for the sublime. In a certain kind of contemporary art the thing seems to have been disappeared. Not the things, but the frames became important. What if the thing has become the human condition? In Chris Salters Ilinx this assumption is evident. It was shown lately in Berlin at the Club Transmediale 2015. Chris Salter describes Ilinx as a ‹performative environment for the general public provoking an intense bodily experience that blurs the senses of sight, sound and touch.›3 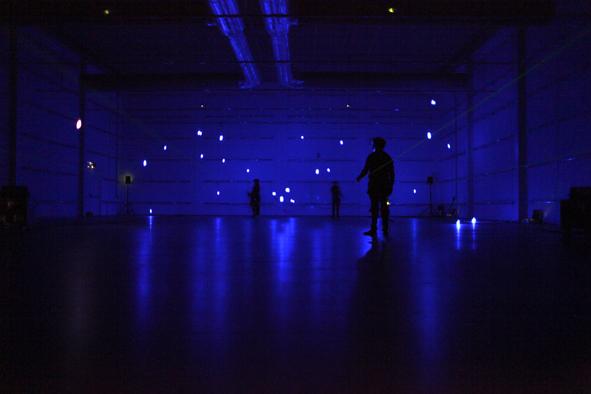 A group of four visitors at a time wears specially designed garments, that are outfitted with various sensing and actuating devices to interface with the prepared performative space: ‹During the event, a ritualistic progression which lasts approximately twenty minutes, the natural continuum between sound and vibration, vision and feeling becomes increasingly blurred, extending and stretching the body’s boundaries beyond the realm of everyday experience.›4

Space, sound and light trigger the visitors ability to see, hear, touch, taste, and smell. Embedded in the frame of the performative environment the visitor as a subject loses increasingly orientation and makes a diffuse experience of his own mind, body and perception. The subject is resolved into the object of the artwork, giving away control over her- or himself, as she/he gets installed in the frame of the environment. Afterward the interviewed visitors describe the event as an extraordinary self-experience that left a sublime feeling, an exaltation caused by the potential of their sensory based human condition.

Chris Salter said in a lecture which he hold at the Bauhaus University Weimar in 2015 that Ilinx is not about the environment or the experience. It is about a discourse which is artistic and scientific at the same time. It is again about the frame. Nevertheless this points to a question that was brought up in 2010 by Jacques Rancière in The Emancipated Spectator5. Isn’t it pretty obvious that the visitors, watched from a third person perspective through the documentation video which Chris Salter calls a part of the artwork, look in a way like guinea pigs?

On the way to Temporary Archipelago No. 3: A Room Full of Cloud