From Ritual to Center Piece 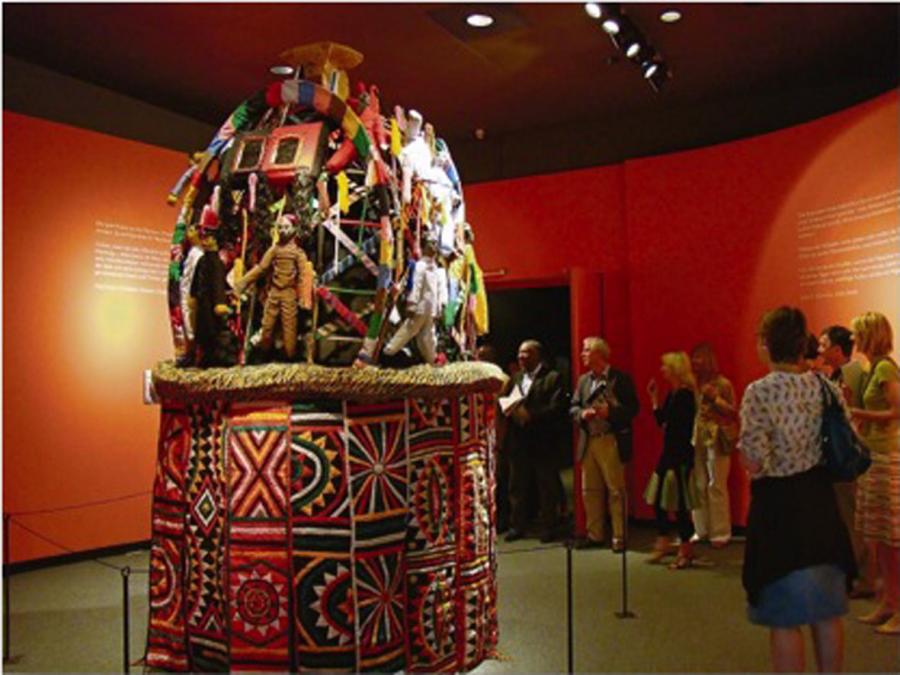 On my first encounter with the Ijele mask I feel puzzled. I recognise the object as part of a ritual, only here in the Ethnological Museum Berlin, it is isolated from all the other elements: a masquerade in the open air, with (Igbo) people from Nigeria, music, a special occasion, and dance. The physical distance to the object – fenced off for security reasons – is in sharp contrast with my immediate association with ritual and community.

Six years ago, artist Chief Anayo Nwobodo made the Ijele mask in Nigeria for a collaborative project with Ikuku Berlin, an association whose aim is to promote Nigerian culture and cultural cooperation between Nigerians and Germans. When the mask was made and the masquerade was held, the museum was not yet involved. A year later, the mask became the center piece of the permanent ‹Africa in Berlin› display.

In an idealistic opening speech, Ahmet Yerima, Professor in Theatre and Culture Studies at the Redeemer’s University in Nigeria, explains the essence of the project as overcoming cultural boundaries and reconsidering (postcolonial) identities.2 He also emphasises that the project is significantly situated in Germany: ‹the country where the scramble for Africa took place … where Africa was carved up into small states by the colonial masters.› This speech is a powerful and explicit counternarrative to African colonial history as written from the perspective of the coloniser. Significant here is what happens when the museum incorporates the mask into its collections and puts it on display.

The aesthetic and sensory qualities of the colourful, large-size mask are impressive. However, viewing is also a negotiation with the self and with history, and the Ijele speaks to me because of the isolation from its ritual context and what the object appears to represent now. The museum display provides for a new context and meaning for the Ijele: with the caption Ijele. An Insight into Igbo Culture in Berlin, the object is transformed from an active connector between cultures into cultural heritage on display in a European ethnographic museum.

What does it mean that the museum is now telling its story? Since the object and stories around it are part of ‹Africa in Berlin›, it is described in a traditionally western visual analysis of (African) art focused on shapes, colours, aesthetics and symbols, carefully selected to avoid the many social and political issues the project deals with as mentioned in the opening speech by professor Yerima. The museum incorporates the mask into their collections and appropriates and recontextualises the Ijele. The discourse around the project becomes part of the collections, determining for a large part how a visitor can view and interpret the object.


Imara Limon is a freelance researcher based in Amsterdam. She is currently a trainee in social entrepreneurship, collaborating with a new makerspace to develop a workshop trajectory in product design. Imara is the former chief editor of Simulacrum and she was part of the New World Summit team, founded by artist Jonas Staal. She studied art history, museum studies and a research MA in cultural analysis at the University of Amsterdam, and is preparing a PhD proposal in postcolonial studies focused on German and Dutch colonial heritage.
Contact: [email protected].